This article was originally published by Media Village and written by E.B. Moss.

What’s the role of ATSC 3.0 around advanced TV interactivity and addressability in an IP-enabled TV world? Wonky enough of a topic for you? Then listen to Jonathan Steuer (pictured right), chief research officer at Omnicom Media Group, and Jeff Minsky, lead analyst and editor of MyersBizNet’s “The Myers Report,” converse on this subject, as well as on dynamic creative, content versioning, and Steuer’s topknot.

The two have a lot in common, aside from both being recognized industry futurists and fans of the Eagles. Each played a role in shaping OMG’s advanced TV strategy. First, Minsky evangelized and implemented early phase addressable TV and automatic content recognition (ACR) data in campaigns for Fortune 500 clients, until 2015. Then Steuer took the reins and created a platform to buy data-driven and addressable TV, which has become an integral part of Omnicom’s cross-agency data and people platform, “Omni.”

I, on the other hand, appreciate the Eagles (I assumed they were talking about the band, not the NFL team, as I know Minsky is Cowboys all the way). But, otherwise, I was just a fascinated fly on the wall during Minsky and Steuer’s far-ranging conversation about Omni, the future of advanced TV, and the impact of data legislation, in Episode 40 of the Insider InSites podcast.

You may want to play this episode here several times to glean all the smart insights. Better yet, subscribe or download via Stitcher, Spotify, iHeartRadio, GooglePodcasts, Apple, TuneIn…and YouTube, since the following are crib notes (edited for clarity) of their forecasting and punditry. 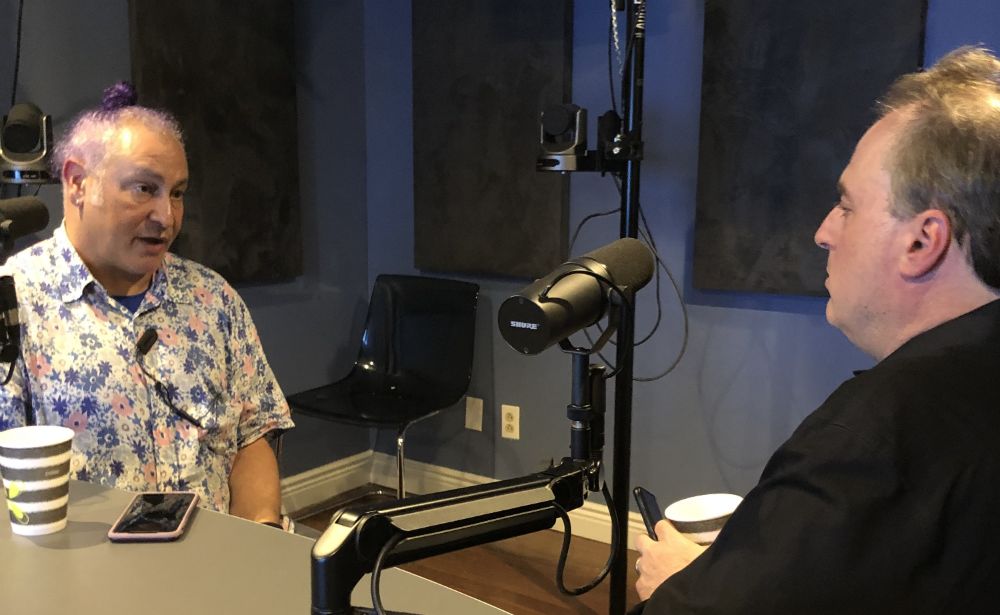 The conversation kicked off with Minsky teeing up the reality on the need to “be smarter with paid advertising in a world where the pool of inventory for it is shrinking.” And Steuer acknowledging that “data is important, but data itself is an enabler to have a better, more efficient conversation — one that’s better for advertisers and better for consumers. Since we’re on a path to lower ad loads overall, it’s imperative to use that data in a [cleverer] way.” Here’s how Omnicom is applying those insights:

“The notion of Omni is as much a framework as it is a platform. It connects a bunch of tools together with an underlying identity framework that’s compatible with all of the identity solutions in the marketplace. The idea is to be able to use that to have a person-level or a household-level conversation throughout the entire advertising process — the entire consumer journey. And that begins with tools that let us see signals about what consumers are doing in the marketplace.”

On Uptake by Creative Agencies:

Given Omni’s rollout to the Omnicom media agencies — as well as creative agencies such as BBDO, TBWA, and DDB — are they using it and perceive a value [from it]?

“It’s early days,” said Steuer, “but we’ve found many of our big client relationships now involve explicit collaborations between an Omnicom creative agency and a media agency. That’s where we’re getting sort of the initial poll….  Having a common framework to connect all of our creative, planning, buying, measurement, reporting, and optimization tools together is better than trying to go out and smash together 27 different vendor solutions without that connective framework.

“But there has to be flexibility because the right tool for one industry might not be [right] for another and the right dataset for one industry might not be the same as for another. So, the focus has been on [an] open and connected [platform] rather than a unified platform…. It’s a mechanism to provide a common footing that everyone, throughout the creative and media delivery and optimization process, can take advantage of.”

On the role of ATSC 3.0 in an IP-enabled TV World:

Minsky explained that the Advanced Television Systems Committee 3.0 (ATSC 3.0) creates technical standards for the delivery and reception of over-the-air broadcast TV. The latest standard, which was finalized in January 2019, allows for two-way interactivity and addressability. However, few broadcast stations have upgraded so far, and TV manufacturers have not yet upgraded the internal hardware to enable ATSC 3.0.

“It’s kind of a race right now and I’m not sure who wins,” Steuer acknowledged. “The thing that’s interesting about ATSC 3.0, as opposed to the other two, [IP-enabled TV and streaming video] — both of which already have the momentum — is that it solves for all the other TVs, as well. So, once that’s the standard, we’d be at a point where literally every video impression is addressable…. And I think the reality is all [TV formats are] likely to survive. There is political and national security interest in actually maintaining a broadcast television infrastructure regardless of how popular streaming becomes.”

On Embracing Dynamic Creative and Versioning:

Steuer believes that “there’s much more effort in that direction, coming from a combination of the bigger scale of addressable and the fact that streaming has grown up as an addressable platform. There already are reasons to do lots of creative versions and figure out how they work. One of our clients is currently running a campaign that has 300 different creative variants. They get that a different[version] of the message to a different person at a different point in time is the right way to have a conversation with them and try to get them to [convert].”

On What the Future Holds:

“I think consumers will be able to pull back more control of their media experiences,” Steuer asserts. “I think, ultimately, it’s good for everybody in the advertising ecosystem and for humans, in general, to have better ability to control their privacy, their personal data, and where they choose to engage with advertising…. A thing I would love to see, and that I’ve been working on in my copious spare time, is to try to pull together a unified measurement framework for the media industry…. Because the alternative to that is advertisers have to keep guessing about how [disparate data sources] are working together — and that will keep resulting in over-frequency of advertising and loss of control.”

Minsky added: “I don’t think I’ve seen as much innovation [or] volatility, with both potential benefit and potential threats to the entire industry’s models. Certainly, if you bought into the fact that data is everything and data is the future, it’s going to be very interesting to see where the privacy legislation nets out. First-party data is still gold. First-party data is the clients’; they can use that. But, outside of that, it’s going to be very interesting to see what happens [with state privacy legislation].

“Having said that, we’re also at the precipice of 5G…. From my experience, every change in media consumption across the digital era has been predicated on a leap of bandwidth. And here we are standing at one of the biggest leaps of bandwidth that we’ve ever seen as a civilization. And so, what does that mean for 4K, 8K, immersive 360? Over the next 12 to 24 months, that will become self-evident.”

As Minsky would say, “But Wait…That’s Not All.” And he’d be right. Listen to the full episode to hear it all.