This article was originally published by Beet.tv.

Until recently, the common understanding of connected TV services was that they were mostly popular with younger cord-cutters and the typical view of addressable TV ad targeting was that it worked mostly at the local level.

But ad agencies are now enjoying recent developments which are widening both of those apertures – audience breadth and geographic scale.

In this video interview with Beet.TV, Matthew Kramer, Managing Director, Advanced Advertising at Omnicom Media Group, describes the trends and technologies he sees presenting a wider opportunity when it comes to audience-targeted TV ads.

Age: “Even when we look at 50+ or 65+ (Nielsen demographics), they’re already watching upwards to eight hours per week of OTT. We’re seeing that even the adoption among the older demographics is starting to happen.”

Breadth: “Having everyone stuck at home and isolating has increased adoption (and) the amount of time people are spending with OTT. Where they might have been people who (only watch) Netflix, YouTube or Hulu, the big players, they’re now starting to delve into less popular apps (like) Tubi, Pluto, Vudu and Crackle. We are seeing a massive increase in those impressions.”

Technology: “Device ID graphs and household graphs are getting strong enough that we can actually start buying audiences within the space.” 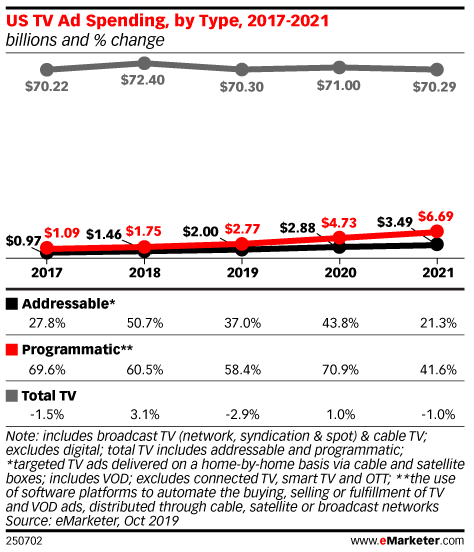 EMarketer in November estimated programmatic TV ad spending will reach $6.69 billion in the US by 2021, more than doubling from $2.77 billion.

That makes it a still-small but fast-growing part of the overall TV ad spending pie.

Omnicom’s Kramer says wants to take the opportunity to gain a detailed view of all the channels through which clients’ ads are placed, including frequency-capping ad exposures across those channels.

Next up, Omnicom is looking forward to buying TV ads addressably at the national level, by participating in beta testing with Project OAR, the consortium kickstarted by VIZIO’s Inscape.

“For a lot of national advertisers who have been concerned about some of the environments that you can be in within the local pods, having access to national pods, I think, is going to be very exciting.

“And so we certainly want to be part of that pilot testing, which is going to be happening, I believe at the end of the summer. That conversation has already started.”

In doing so, Kramer wants to work with both supply-side platforms (SSPs) and publishers on decision-making.

This is from a Beet.TV series titled “The Accelerated Evolution of Programmatic OTT” presented by PubMatic.  for more videos please visit this page.